I've always been interested in novels that are part of an underlining mythos or world in which several different trilogies or series are set such as Mercedes Lackey's Valdemar novels, Terry Brooks's Shannara novels, and Marion Zimmer Bradley's Darkover novels to name a few. I also love crossovers, even if it's merely a cameo. With that in my mind, I set out to create my own underling mythos in which I could set a series of standalone young adult fantasy novels and various trilogies and duologies that could either be read successively as they are published or cherry-picked according to interest. The point is that you will be able to read each novel or series without having had to read any previous novels, and it won't affect your understanding of the stories. However, the plot of each story will be a consequence of the events in my flagship novel, The Supreme Moment, and several of its characters will appear in cameos in novels down the line.

The Supreme Moment is a YA Urban Fantasy set in the fictitious Texas coastal city of Tempus Port... 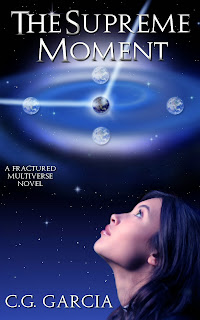 The moment a bunch of men with guns kicked down the doors of her house, eighteen-year-old Avery Morgan knew her estranged father’s gambling addiction had finally caught up to her family in the worst way. A crime syndicate has come for her little sister, Ella, and with only a handgun to hold nearly a dozen well-armed men at bay, Avery is on the brink of doing something unspeakable when she is interrupted by the sudden arrival of Darrien Stathos, a business mogul whose true persona is rumored to be that of the lord of the criminal underworld known as Kairos. Darrien announces that he is also there to collect on a contract with Avery’s father—for Avery. Forced to choose between her family’s lives or her freedom, Avery willingly gives herself to Kairos.

As she struggles to come to terms with the idea that she is now the property of a crime lord, several disturbing observations about Darrien’s eyes and the frightening, inexplicable ways he stopped a couple of would-be assassins make Avery rethink her initial dismissal of some of the more outlandish gossip she had heard that questioned his humanity. Add to that the constant harassment of two FBI agents that are convinced she is the key to finally bringing down the crime lord, Kairos, and learning a disturbing and dangerous truth about herself, and Avery is ready to break.

Little do any of them know that the truth of Darrien’s identity is something that will shake the very foundation of their understanding of reality.

The novel will be available for purchase in paperback on Amazon and on ebook for Kindle, Nook, and Smashwords for all other formats within the next two weeks. As soon as I have a definitive publication date, I'll post all relevant info and links.

Thanks for reading all my rambling, and I hope everyone who decides to give my novel a read enjoys it as much as I enjoyed writing it! I'm already hard at work on the next Fractured Multiverse novel, entitled Black Crimson that I hope to have out by March.
By Unknown - January 03, 2014